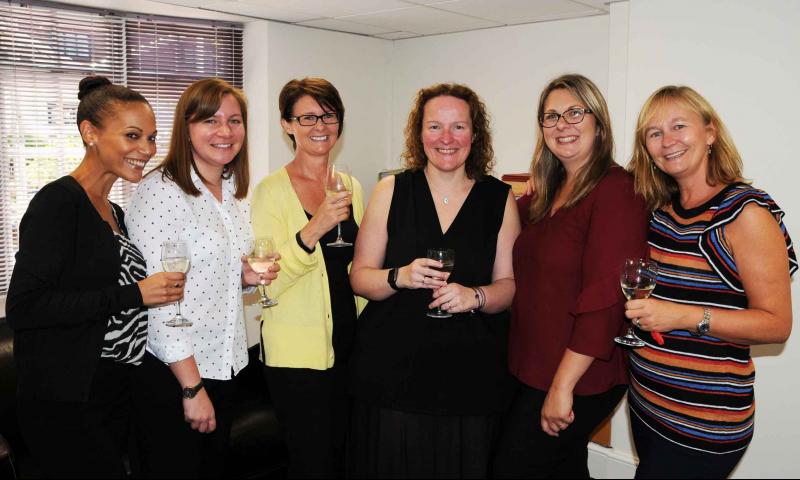 The Head of the Residential Property team has racked up an impressive quarter of a century working for the leading Basingstoke law firm, whose Town Gate offices are in London Street.

To mark her 25 years of sterling silver service, colleagues gathered for a celebration along with Senior Director Howard Gardener and fellow founding Director Jonathan Pender.

When Zoë, who is now a Director, joined Phillips in 1993 as a trainee Solicitor, the big screen hit was Jurassic Park, while Bill Clinton was president of the United States and the average price for a semi-detached house in Basingstoke was around £74,000.

The avid film buff and car enthusiast initially worked in various departments before settling in the Residential Property team at the firm’s then Wolverton Court offices in London Street.

Since then the firm has grown and Zoë has taken charge of the Residential Property team following Alex Preshaw’s retirement in 2016.

At the lunch-time gathering, Howard enlightened colleagues a little of Zoë’s background, noting that she was a prefect in charge of stationary while at Kendrick Girls’ School and was a founding member of the school’s computer club.

Later she went on to study Electronic and Electrical Engineering at Birmingham University before choosing the law for her career and carrying on to do a law degree.

Howard praised Zoë for her dedication to her clients, colleagues and to the firm.

He said: “I am continually impressed with what she does with the high volume of work and the many long hours – it is an extraordinary achievement.”

“We have had one or two recessions over the years, but Zoë has rather self-proofed herself against these and developed the Shared Ownership market, that has continued to provide her with a growing number of clients even when there have been troughs.”

Zoë said: “I have been here half of my life but I do love Phillips. Thank you all for helping me enjoy it and thank you everyone for my lovely gifts.”

She also spoke with affection of the late John Phillips, who was a founder of the firm and whom the firm is named after, who noticed that Zoë was “clearly someone who enjoys conveyancing.”

Zoë said: “It was through Mr Phillips that I stayed with the firm after my training contract and then moved on to work with Alex – they taught me so much. I have never looked back since and look forward to the years ahead.”