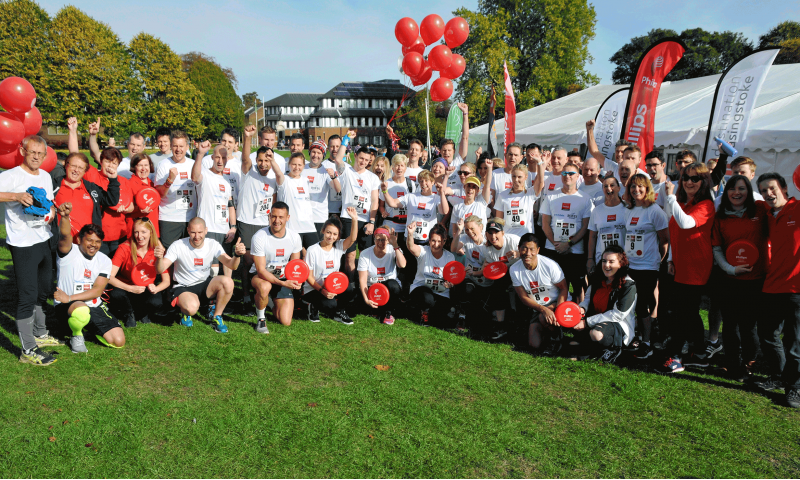 Congratulations to everyone who took part in Sunday’s Phillips Basingstoke Half Marathon.

This year was the fifth year that leading law firm Phillips Solicitors were the headline sponsors of the popular event.

Among those who completed the 13.1mile course was Phillips Senior Director Howard Gardener, who has ran every single half marathon since the race started in 2011.

He headed a team of 53 runners, including fellow Director Jonathan Pender and new Directors Jack Gardener and Max Hope, as well as three other colleagues, who work for the firm based in London Street.

This year Team Phillips were and still are raising funds for Pelican Cancer Foundation.

From its base at The Ark Conference Centre, in the grounds of Basingstoke hospital, Pelican provides grass root funding for ground breaking research and produces and hosts training programmes. As a result of this work Pelican has had a significant impact on 11.8% of all UK cancer patients.

Pleased with his two hour, 34 minutes, time, Howard, who was recently appointed as a Trustee of Pelican Cancer Foundation, said: “I was particularly pleased that I crossed the finish line with my good friend, consultant surgeon Brendan Moran, who is also a Trustee at Pelican.”

“Even though this year most of the route was run in reverse to its normal direction, it was still very much a challenge – those hills don’t get any easier!”

“Nevertheless, I think it was all worth the effort as we support Pelican Cancer Foundation, which does a tremendous job in helping to fight ‘below the belt cancer.’ The work Pelican does is truly amazing.”

“One thing that stayed the same was how the event brought the community together and as usual it was great to see so many people cheering and encouraging us on.”

Howard added: “I am full of admiration to all those who took part in Sunday’s event and I am especially grateful to those who ran with Team Phillips. As usual Destination Basingstoke did a first rate job in organising the event – they even arranged for the sunny weather!”

Pelican Chief Executive Sarah Crane, praised Phillips for its fantastic achievement and said it is not too late to make a donation to the Phillips fundraising website.

“It was great to see so many running on Team Phillips for Pelican Cancer Foundation,” said Sarah.

“We are incredibly grateful for all their efforts.  The money raised will go towards a new research project looking at improving the recovery rate of patients with advanced Bowel Cancer.”

So far more than £1,500 has been raised for via the firms fundraising page which can be found by visiting https://uk.virginmoneygiving.com/Team/Phillips2018