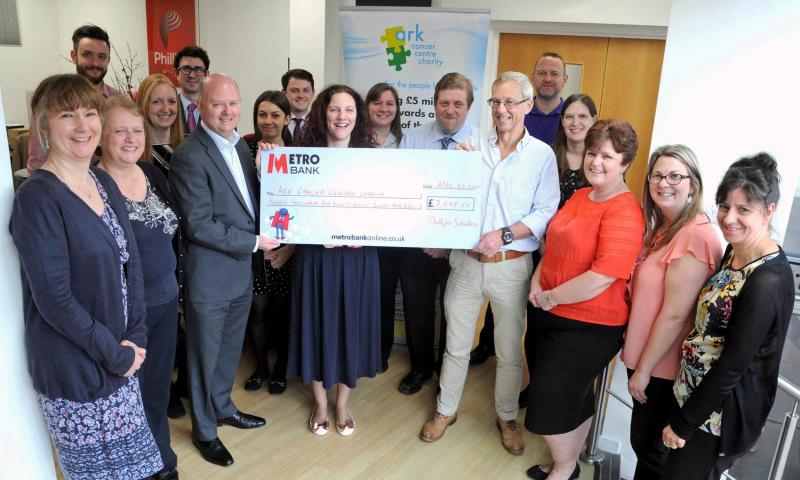 Our year of fundraising at Phillips Solicitors has paid off as we were able to present the Ark Cancer Centre Charity with a cheque for £7,098.

The giant-sized cheque was an accumulation of various fundraising activities for the charity, which for the second year running has been the firm’s chosen charity of the year.

Among the activities were homemade cake sales, a Christmas hamper raffle, while two colleagues signed-up as Ark Riders, taking part in last summer’s Ark to Arc Challenge, cycling from the Ark Conference Centre in Basingstoke to the Arc de Triomphe in Paris.

A major fundraising opportunity was through the Phillips Basingstoke Half Marathon, held in October. During our fourth year as headline sponsor, Team Phillips was able to raise £2,085 through sponsorship that was match-funded by Greenham Common Trust through a scheme called The Good Exchange.

Phillips Director Jonathan Pender, said: “I feel our colleagues have really got behind the Ark Cancer Centre Charity because we all know of someone who has battled against cancer.”

“The charity is aiming to raise £5million towards a cancer treatment centre that will help and support people in the Basingstoke and north Hampshire area fight against this awful disease.

“Once the centre is open it will without doubt make a huge difference to help local people.”

Impressed with the amount of money raised over the past year, fellow Director Hayley Eachus said: “As usual our colleagues have proved to be very generous.

“As a company it’s important to us to support a local charity as one of the ways in which we give something back into the community.”

Click on the highlighted link to find out more about the Ark Cancer Centre Charity.