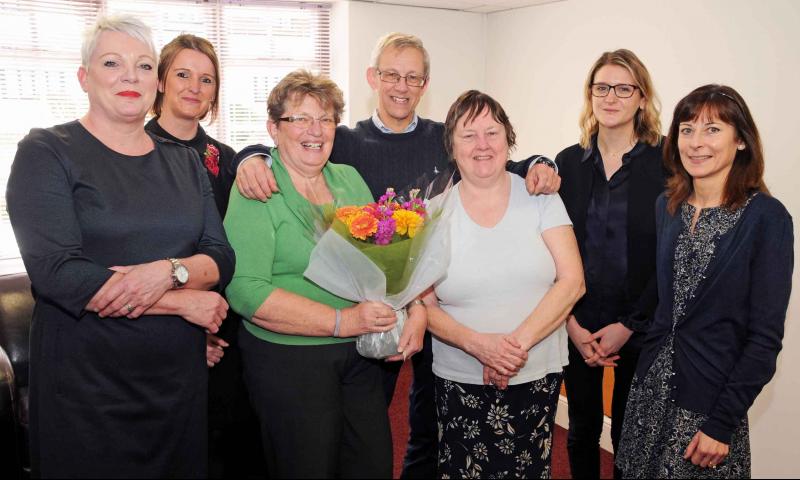 When Alex Hooker joined Phillips Solicitors as a Secretary in 1988, she was used to having someone else typing-up her dictation.

That was because prior to joining the Basingstoke law firm, Alex had worked as a fee earner as part of the British Rail legal team.

Based in London for 13 years, initially at Marylebone Station and then at Paddington Station, she had worked her way up to become a Junior Managing Clerk and was very much used to dealing with her own cases.

But that changed when Alex joined Phillips, where she has worked tirelessly firstly as a Secretary and then as a Personal Assistant, to support the needs of one of the firm’s founding directors Jonathan Pender, who is head of the Commercial and Corporate Law Department.

At a lunchtime gathering to celebrate Alex’s 30 year milestone, held at the firm’s Town Gate offices in London Street, Jonathan praised her unwavering support and commitment to the firm and its clients.

He said: “Alex has been an absolute credit to Phillips. One of the things that I have learned as a fee earner is that you need an Alex – someone who is there to keep an eye on what’s going on.”

“It’s been a pleasure working with Alex over the last 30 years – you’ll be pleased to know your probation period has passed and we’ll keep you on,” joked Jonathan, who added: “I really don’t know where the time has gone – it is just extraordinary. It must be enjoyable because you wouldn’t keep coming in, day in and day out.”

“On behalf of the firm thank you very much.”

Alex echoed Jonathan’s sentiments about time flying by and recalled spotting a half page advertisement in the local paper for a Secretary.

“I was a getting fed up with the travelling to London and commuting around the country to various courts and thought I’d rather work locally and decided to apply.”

It is a decision she has never regretted.

“It’s a jolly place to work. I like the people I work with and I enjoy my job, partly because I’m learning new things all the time. In fact, I love the variety of work, which can be challenging, but is satisfying and rewarding.”

“When I joined Phillips the firm was in its infancy. However, over the past 30 years I have seen the number of clients our department looks after increase and long may that continue.”

Alex, pictured in green, said she is very much looking forward to a special holiday treat arranged by Jonathan for her and her husband Bob.