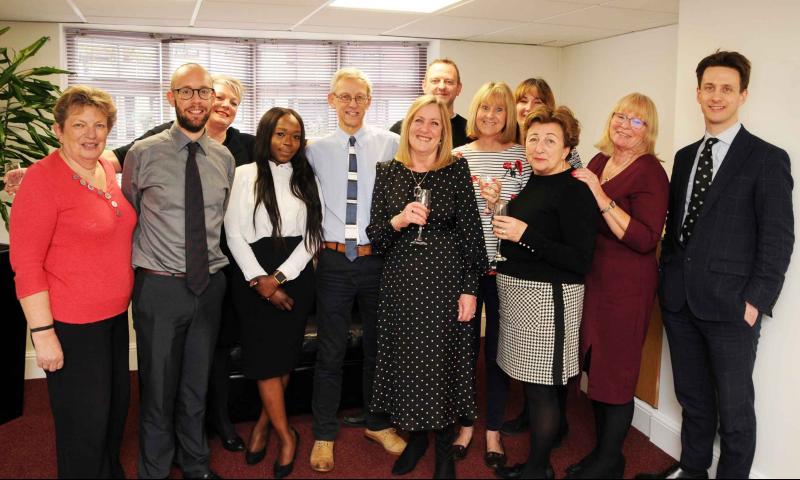 Described as the “Guardian of the Door,” a much-valued member of staff at Phillips Solicitors has reached a 20-year milestone.

To mark the occasion a celebratory lunch was held for Office Manager/Receptionist Sheila Garrett who has worked for the law firm since 1999.

She initially started working at Phillips as lunchtime cover for the busy reception desk, but she proved to be such a good fit that her hours were extended, where she was able to job share with her colleague Theresa Dawe, who recently marked her 30 th anniversary at Phillips.

Phillips director Jonathan Pender was full of praise for Sheila’s dedication and hard work calling her the “Guardian of the Door.”

He spoke of the importance of Sheila’s role explaining: “Like Theresa, Sheila gives the first impression to everyone who comes to Phillips as she is often the first point of contact to anyone visiting or calling our office for the first time.”

“It is fundamentally important that the role of receptionist represents our company in the right way, which Sheila does so well, as that is when potential clients and visitors gain their first impression of us.”

Jonathan, who presented Sheila with a silver neckless with a beautiful blue larimar stone said: “Thank you very much indeed Sheila on behalf of everybody at Phillips. Your work and experience are invaluable, and we are appreciative of it. Here’s to the next 20 years!”

Delighted with her gift, Shelia said: “I have a very varied role and I work with some lovely people here at Phillips where I meet some wonderful members of the public.”

“I have seen the firm grow in the last 20 years. When I first started there were 24 people now that has doubled.”