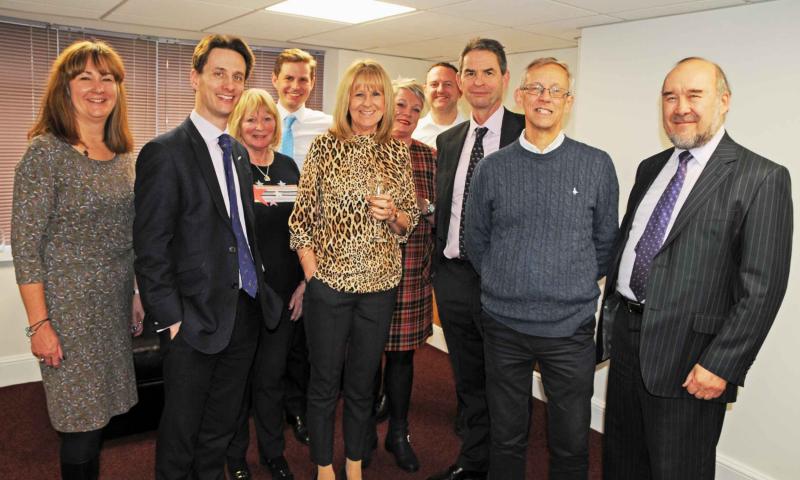 For many people 1989 was a momentous year. It was the year George H W Bush became president of the United States, the year when the Berlin Wall came down and when the Tiananmen Square pro-democracy protests took place in China.

For Phillips Solicitors it was equally momentous as that was when Theresa Dawe joined the young law firm as a receptionist, later becoming office manager.

Back then Phillips was based at Wolverton Court in London Street, in Basingstoke’s Top of the Town, where Theresa was known as the “Guardian of the Spiral Staircase.” The firm had a distinctive staircase, where Theresa acted as a gatekeeper, which led from reception to the Solicitor’s offices.

Now based at the firm’s Town Gate offices in London Street, Theresa was described affectionately as the “Queen of the Front Office,” by the firm’s Senior Director Howard Gardener at a lunch-time gathering to mark her milestone.

Howard said: “This is a fantastic anniversary. It’s excellent for us to have Theresa here for such a long time. She does a wonderful job and it is such an important job as she is often the person who gives the first impression of Phillips when people visit our offices setting the tone of firm – she does a marvellous job.”

“I’d like to thank her for her hard work and dedication to Phillips throughout the years.”

As a token of appreciation, Theresa was presented with a beautiful silver and diamond necklace by Howard.

Delighted with the gift, Theresa said: “I’ve stayed with Phillips because I like my job very much. The offices are lovely and nice to work in, with nice colleagues – what’s not to like?”

Theresa added: “I enjoy meeting such a wide range of people. There is never a dull moment and it’s great to work for such a top class law firm.”